It Takes a Scientist to uncover Hidden Gems (Edmonton Journal) 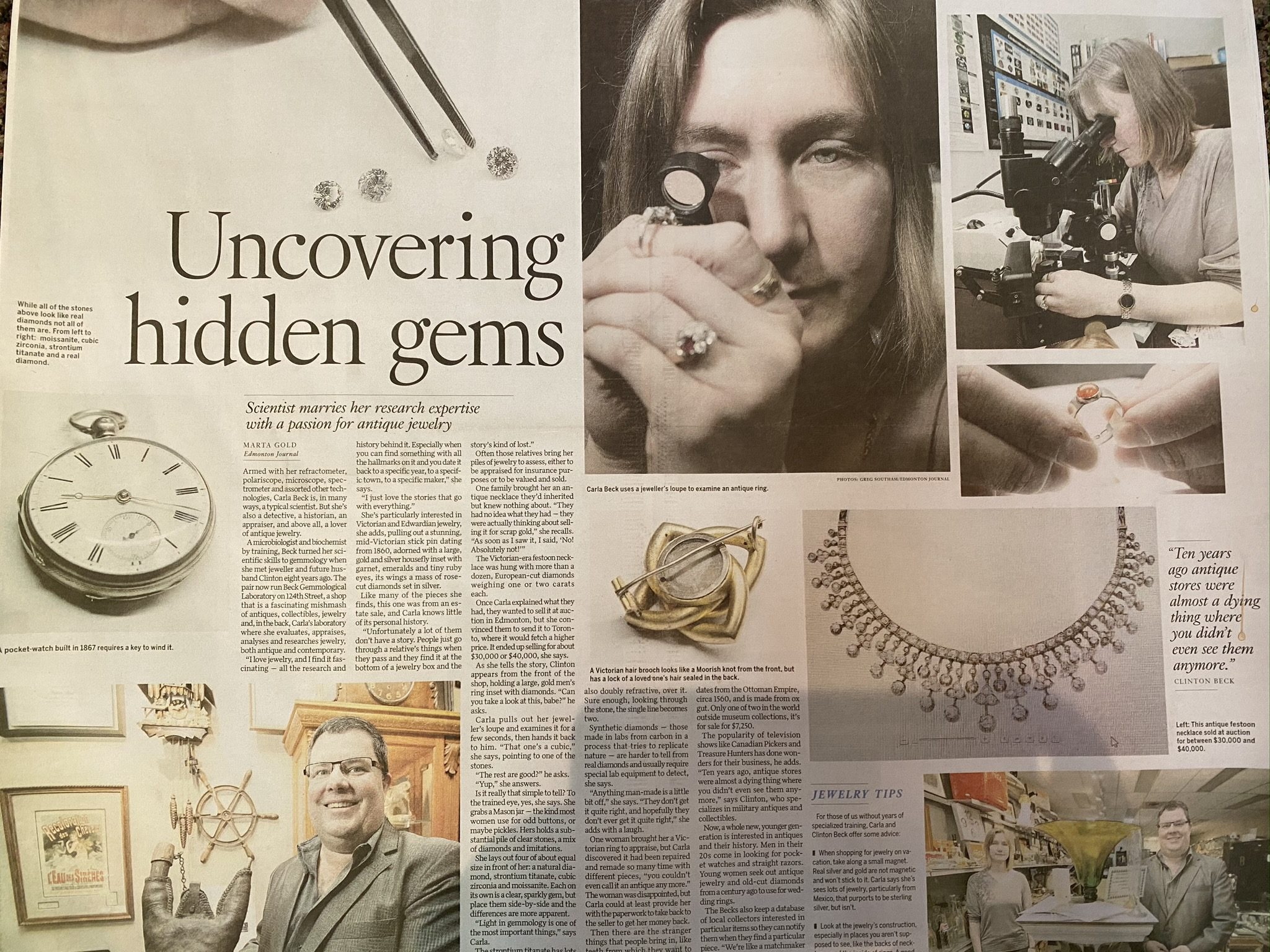 EDMONTON – Armed with her refractometer, polariscope, microscope, spectrometer and assorted other technologies, Carla Beck is, in many ways, a typical scientist. But she’s also a detective, a historian, an appraiser and, above all, a lover of antique jewelry. A microbiologist and biochemist by training, Beck turned her scientific skills to gemmology when she met jeweller and future husband Clinton eight years ago. The pair now run Beck Gemmological Laboratory on 124th Street, a shop that is a fascinating mishmash of antiques, collectibles, jewelry and, in the back, Carla’s laboratory where she evaluates, appraises, analyses and researches jewelry, both antique and contemporary.

“I love jewelry, and I find it fascinating — all the research and history behind it. Especially when you can find something with all the hallmarks on it and you date it back to a specific year, to a specific town, to a specific maker,” she says.

“I just love the stories that go with everything.”

She’s particularly interested in Victorian and Edwardian jewelry, she adds, pulling out a stunning, mid-Victorian stick pin dating from 1860, adorned with a large, gold and silver housefly inset with garnet, emeralds and tiny ruby eyes, its wings a mass of rose-cut diamonds set in silver.

Like many of the pieces she finds, this one was from an estate sale, and Carla knows little of its personal history.

“Unfortunately a lot of them don’t have a story. People just go through a relative’s things when they pass and they find it at the bottom of a jewelry box and the story’s kind of lost.”

Often those relatives bring her piles of jewelry to assess, either to be appraised for insurance purposes or to be valued and sold.

One family brought her an antique necklace they’d inherited but knew nothing about. “They had no idea what they had — they were actually thinking about selling it for scrap gold,” she recalls. “As soon as I saw it, I said, ‘No! Absolutely not!’”

The Victorian-era festoon necklace was hung with more than a dozen, European-cut diamonds weighing one or two carats each.

Once Carla explained what they had, they wanted to sell it at auction in Edmonton, but she convinced them to send it to Toronto, where it would fetch a higher price. It ended up selling for about $30,000 or $40,000, she says.

As she tells the story, Clinton appears from the front of the shop, holding a large, gold men’s ring inset with diamonds. “Can you take a look at this, babe?” he asks.

Carla pulls out her jeweller’s loupe and examines it for a few seconds, then hands it back to him. “That one’s a cubic,” she says, pointing to one of the stones.

Is it really that simple to tell? To the trained eye, yes, she says. She grabs a Mason jar — the kind most women use for odd buttons, or maybe pickles. Hers holds a substantial pile of clear stones, a mix of diamonds and imitations.

She lays out four of about equal size in front of her: a natural diamond, strontium titanate, cubic zirconia and moissanite. Each on its own is a clear, sparkly gem, but place them side-by-side and the differences are more apparent.

“Light in gemmology is one of the most important things,” says Carla.

The strontium titanate has lots of rainbow-coloured sparkle to it. “It’s got lots of fire, more so than it should to be a diamond, and it’s way softer.”

Cubic zirconia “just doesn’t look right — it almost looks like glass. It doesn’t have that sparkle that a diamond should,” she says.

Synthetic diamonds — those made in labs from carbon in a process that tries to replicate nature — are harder to tell from real diamonds and usually require special lab equipment to detect, she says.

One woman brought her a Victorian ring to appraise, but Carla discovered it had been repaired and remade so many time with different pieces, “you couldn’t even call it an antique any more.” The woman was disappointed, but Carla could at least provide her with the paperwork to take back to the seller to get her money back.

Then there are the stranger things that people bring in, like teeth from which they want to salvage the gold, says Clinton. “That is kind of weird and yucky … Sometimes I get a whole bucket of teeth. But they’re worth money — A tooth can be worth $100.”

Someone else brought the couple a bunch of African-looking masks they picked up at a local garage sale. In it the couple found an old water carrier they couldn’t identify. After some research, they discovered a similar one at a museum in England.

It turns out the garage-sale find dates from the Ottoman Empire, circa 1560, and is made from ox gut. Only one of two in the world outside museum collections, it’s for sale for $7,250.

The popularity of television shows like Canadian Pickers and Treasure Hunters has done wonders for their business, he adds. “Ten years ago, antique stores were almost a dying thing where you didn’t even see them anymore,” says Clinton, who specializes in military antiques and collectibles.

Now, a whole new, younger generation is interested in antiques and their history. Men in their 20s come in looking for pocket watches and straight razors. Young women seek out antique jewelry and old-cut diamonds from a century ago to use for wedding rings.

The Becks also keep a database of local collectors interested in particular items so they can notify them when they find a particular piece. “We’re like a matchmaker for antiques,” says Clinton.

For those of us without years of specialized training, Carla and Clinton Beck offer some advice:

– When shopping for jewelry on vacation, take along a small magnet. Real silver and gold are not magnetic and won’t stick to it. Carla says she’s seen lots of jewelry, particularly from Mexico, that purports to be sterling silver, but isn’t.

– Look at the jewelry’s construction, especially in places you aren’t supposed to see, like the backs of necklaces and the inside of rings. A good piece of jewelry will be free of pockmarks and dings, even in those spots.

– If you have family jewelry that’s of sentimental value but you don’t use or wear (like a cumbersome pocket watch or antique brooch), try mounting it in a shadow box alongside an old photo of the relative who owned it.